In late summer, one of the highlights of the elite graduate study programme was once again on the agenda: the study week. Due to the Corona pandemic, this year it did not take place in Tramin in South Tyrol as usual, but in Regensburg. The topic that the students had agreed on was Quantum Computing. The main part of the week consisted of lectures by three experts on this topic who had been invited and visited us in Regensburg during the week. The first speaker was Prof. Dr. Rudolf Gross from the TU Munich. He introduced the theoretical concepts of Quantum Computing and gave an overview of the basic ideas. In the course of the week, he then went into superconducting quantum circuits, which represent a possible realisation of quantum computers. The second invited guest speaker was Prof. Dr. Frank Wilhelm-Mauch from the University of Saarbrücken and the FZ Jülich. In his lectures, he introduced us to quantum algorithms and quantum gates. Later, he also talked about decoherence and showed where various errors can arise in quantum computers and what strategies exist for quantum error correction. As the third guest speaker, Prof. Dr. Ferdinand Kuemmeth from the Niels-Bohr Institute in Copenhagen spent the week with us. He mainly focused on the experimental perspective on quantum computing and introduced his research on quantum dots, which, in addition to superconducting circuits, represent a further realisation possibility for quantum computers.
In order to be able to apply what we had learnt in the lectures in practice, Tuesday and Wednesday afternoon were spent with various challenges set by the experts. The challenges involved working in small groups on a variety of tasks, ranging from theoretical basics on coherent states, to the step-by-step experimental construction of a quantum computer (on paper), to computational tasks, including writing quantum code for a simulated quantum computer, which in the end was even executed on a real quantum computer at IBM. The challenge groups were made up of students from different years, so that each student could contribute their own knowledge and the networking between the years was promoted. Thanks to the good weather, most of the challenges could be completed outdoors on the beautiful Regensburg university campus. The results of the group work were then presented to the other groups in a plenary session on the last day of the study week.
In addition to the physics part of the week, the social aspect was not neglected. To add a little Italian flair, we had lunch at the pizzeria at Regensburg University. This was a good opportunity to talk to the lecturers and discuss further questions about their talks and research topics. The evenings were mostly free, so the participants of the study week explored summery Regensburg at night and spent many hours on the banks of the Danube.
On Thursday, there were two city tours on the topics “Dawn of gods: legends in Regensburg” and “Transformation of a city with much historic heritage and buildings into a modern city”. These guided tours of the city, which lasted several hours, contained a lot of exciting information and even the Regensburg students were able to learn a lot of new things about their university city. Afterwards, a hike was on the agenda, and the late summer gave us fantastic weather for this. We went north over the famous Steinerne Brücke to the Winzerer Höhen and then west along the Danube, where we were rewarded with a beautiful view of Regensburg’s old town, which, by the way, has been a UNESCO World Heritage Site since 2006 together with Stadtamhof (the part north of the Steinerne Brücke). The evening was rounded off with a visit at a beer garden directly at the Danube, where we were able to try a wide variety of Bavarian delicacies. 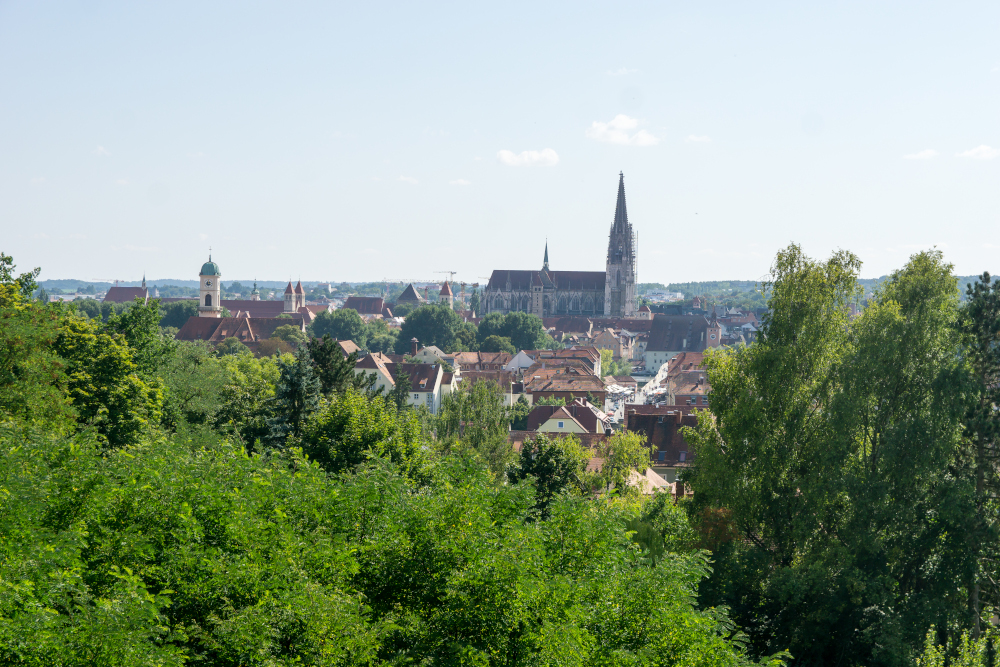