Insight into the Quantum World

Insight into the Quantum World

Michael Nicklas has studied and obtained his PhD within the research orientated program “Physics advanced”. He investigated quantum transport in individual carbon nanotubes and developed new theoretical tools for their description.

The paradox of coexistence or superposition of virtually exclusive quantum states is vividly staged by the imaginary Schrödinger’s cat experiment where a poor cat in a sealed box gets killed if a certain quantum event happens. If the quantum system is a coherent superposition of two quantum states, it seems that also the cat is in a superposition of dead and living state.
In Schrödinger’s Gedanken-experiment the operation of opening the box – the measurement – will eventually pose an end to the embarrassing situation: the cat is found either dead or alive. Quantum superpositions do show measurable effects in the macroscopic world if the two alternatives can interfere before being measured.
An interesting example, among many, of this phenomenon is given by the electromagnetically induced transparency in atomic physics. In a seminal experiment, first realized in the 70’s, an ensemble of atoms was illuminated with two coherent beams of light of slightly different color, inducing transitions between an atomic state “A” and an excited state “C” or between another state “B” and the same excited state “C”. Taken independently, each of the two processes absorbs light, but if the light beam are superposed the processes interfere and suppress each other, leaving the atoms in an inert state, called “dark state”.

A turnstile for electrons.

A joint team of experimental and theoretical physicists at the University of Regensburg has recently demonstrated that the same scheme in an all-electronic device. The device used in the experiment is a carbon nanotube (CNT) connected to two gold electrodes (see figure). A CNT is a millionth of mm-thick cylinder made out of a single layer of carbon atoms. It is basically an elongated molecule which acts as a nanoscopic transistor.
The electrons can enter the CNT through one and leave by the other contact one-by-one as the customers enter in a post office via a turnstile. Electrons can circulate clockwise or anti-clockwise along the CNT circumference, corresponding to a left- or right-turning turnstile. These two options are like the dead-cat and living-cat state in the Schrödinger’s box, that is, there are coherent superpositions of them. Actually, such superpositions can be constructive, which means that the electron can leave the CNT, or destructive, implying that the electron gets stuck in a so-called dark state, without the possibility to leave the CNT. Like in a turnstile, if a customer gets stuck, the entire queue won’t move anymore, meaning that there is no current flowing in the device.
Having being predicted for long time, the experiment of the Regensburg team has demonstrated that dark states can be produced also with electrons. The nature of the dark state has been modeled in detail by Michael Nicklas and his coworkers, leading to a detailed theoretical understanding of the phenomenon in the new material basis.

Learn more about our research 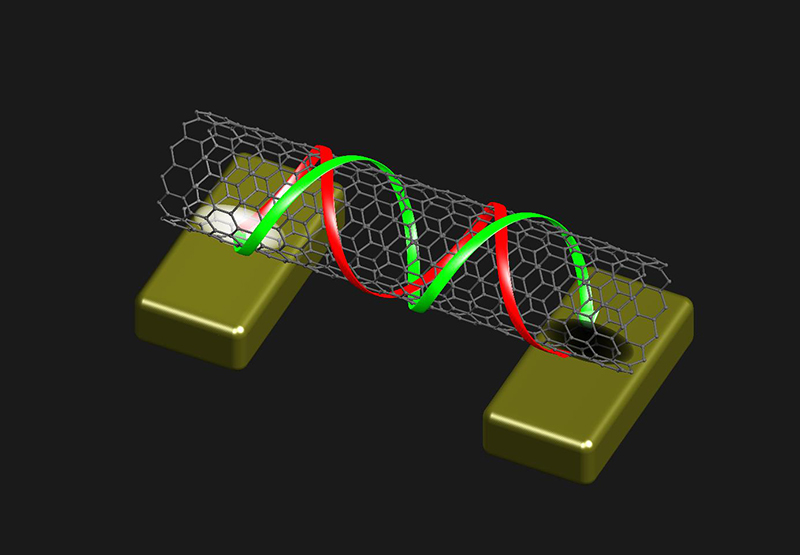 Interference of electron waves in a carbon nanotube. Electrons in a nanotube do not need to decide for one orientation of the spiral (red or green), but are allow to assume a superposition of both. (Copyright: Andrea Donarini, Universität Regensburg)