Dominik Peller is an alumnus of the Elite Physics Curriculum at the University of Regensburg. He developed the world’s first ultrafast microscope that can record the motion of an individual molecule, one trillion times faster than a conventional camera.

The nanoworld in motion

Every day, chemists imagine atoms and molecules floating around in space, vigorously rotating and twisting, eventually breaking bonds and forming new connections. Physicists picture how electrons are, for example, efficiently generated and transported in a solar cell. And biologists visualize biomolecules that vibrate and interact, giving rise to physiological function of a cell and essentially composing the mechanisms of life.
But in fact, they don’t really know. All these images stem from pure imagination as it has been impossible to directly watch any of such processes in motion pictures. Atoms and molecules are 10 000 times too small to be observed in a conventional microscope. And even more, their motion is tremendously fast: one trillion times more rapid than what a conventional camera could capture.
In the course of his master’s thesis at the University of Regensburg, Dominik Peller built the world’s first ultrafast microscope that records single-molecule movies in femtosecond slow-motion (1 fs = 0.000 000 000 000 001 s).

One of the most powerful techniques to record an image of individual atoms and molecules is scanning tunneling microscopy (Nobel Prize 1986). The basic idea is similar to a record player where a needle is used to sense the grooves in a record. In a scanning tunneling microscope, a sharp needle with only one atom at its apex serves as an extremely fine sensor to hover over a surface and sense individual atoms and molecules. This concept allows a still image of a molecule to be recorded, but it is way too slow to resolve its ultrafast motion.
Femtosecond lasers, on the other hand, have recently paved the way to probing and even controlling ultrafast processes via lightwaves. But in optical experiments, the spatial resolution is limited.
Combining these two fields, the researchers in Regensburg developed the first ultrafast microscope that can record movies of a single molecule in femtosecond slow motion. They control their world-record scanning tunneling microscope with ultrashort laser pulses, allowing them to steer and watch ultrafast single-molecule motion. This novel concept provides an entirely new access to the nanocosm.

In first experiments, Dominik Peller studied the organic molecule pentacene. When such a molecule is in contact with a surface, an ultrafast single-molecule vibration towards and away from the surface can occur. This motion could be controlled and time-resolved, yielding the very first femtosecond movie of an individual molecule.
During his PhD thesis, Dominik Peller continues to work on this experiment, aiming to record the first slow-motion movie of a chemical reaction.

Learn more about our research 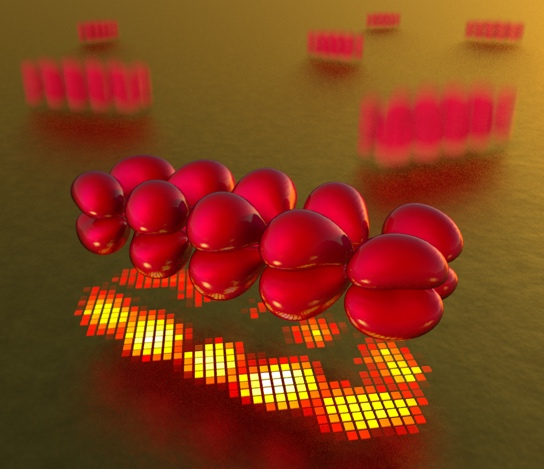