Quasi-one-dimensional systems exhibit many-body effects elusive in higher dimensions. A prime example is spin-orbital separation, which has been measured by resonant inelastic X-ray scattering (RIXS) in Sr2CuO3. We derive the time-resolved RIXS spectrum of Sr2CuO3 under the action of a time-dependent electric field. We show that the external field can reversibly modify the parameters in the effective t−J model used to describe the spinon and orbiton dynamics in the material.

Control over the properties of quantum matter is one of the central goals of modern condensed-matter physics, which holds promise for a new generation of electronic/photonic devices with currently inaccessible functionalities. In particular, ultra-short off-resonant laser pulses have paved the way to reversibly control the microscopic interactions in solids. It was theoretically predicted in 2015 and in optical lattice experiments verified that, by tuning strength and frequency of the driving, the exchange interaction between microscopic spins can be controlled. In solids, however, a major challenge to implement a similar dynamic control is the heating due to photon absorption from the drive.

In this work we consider the charge-transfer model of the CuO3 chains in Sr2CuO3. Its Mott gap implies a large transparency window which limits heating via multi-photon absorption and also makes the insulator robust against tunnelling breakdown in static fields. Therefore, Sr2CuO3 should be well suited to explore dynamic control of many-body physics in solids.

As Sr2CuO3 is a quasi-one-dimensional antiferromagnetic material, electrons can not propagate freely. An electronic excitation will thus fractionalize in its elementary excitations. In our case, these are the so-called orbiton and spinon, which carry only orbital and spin quantum numbers, respectively. Their respective hopping element is given by t and J , which we derive from the actual charge-transfer model. If J > t the spinon moves faster than the orbiton and refer to it as the fast spinon regime. It turns out, that in equilibrium this is the case Sr2CuO3. Contrary J \lt t is the slow spinon regime. By including the effect of the drive to the charge-transfer model one then gets field dependent hopping elements.

The spectrum of Sr2CuO3, which is what one measures in experiments, exhibit a continuum with a dispersion relation that is strongly dependent on these hopping elements. Thus by altering t and J by the drive, we should see a corresponding change in the spectrum. However, the experimental technique has to be able to be sensitive to orbital and spin degrees of freedom across the Brillouin zone. Time-resolved resonant inelastic X-ray scattering (trRIXS) meet these requirements. It probes the non-equilibrium dynamics by scattering ultrashort X-ray pulses tuned to a characteristic atomic absorption edge. Once the incoming X-ray photon is absorbed, the system is transferred into a highly unstable intermediate state, which decays within a few femtoseconds by emitting an X-ray photon. Whereas the resonance condition greatly enhances the RIXS cross section, the many-body interactions in the intermediate state are what makes trRIXS sensitive to orbital and spin degrees of freedom. 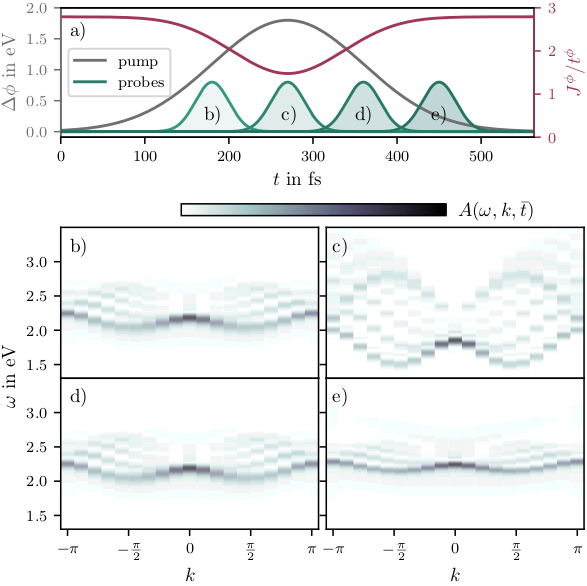 In Figure 1 b)-e), we show the time evolution of the spectral function A(\omega, k, \bar t) during the time-dependent driving, which is obtained from a numerical simulation on finite cluster of L=18 sites. At strong values of the external field, the spectral function substantially changes with respect to equilibrium and one identifies the appearance of a well-defined upper orbiton branch not present at lower values of the field, see Figure 1 c). This is a signature of the transition from the fast to the slow spinon regime. As the pump strength decreases, the spectrum narrows into its equilibrium shape, which happens reversibly, see Figure 1 d) and e). This proves that short pulses with realistic field amplitudes can be used to reversibly control the spin-orbital excitations in Sr2CuO3.

More generally, the spin-orbital physics in Mott insulators is a suitable platform to explore the reversible control of many-body dynamics in solids with strong laser fields. In particular, with the improved energy resolution available at new generation free electron lasers spin-orbital excitations can be probed using trRIXS. Moreover, our analysis shows that a control of the low energy physics can be achieved by two different pathways, i.e., Floquet engineering with frequencies \Omega>t,J , and a less explored sub-cycle control with strong THz transients ( \Omega\lt t,J ).

Prerequisite for the project was a good knowledge of quantum mechanics and ability to code/learn to code. Advanced methods in quantum many body theory (e.g. second quantization, Green’s functions, Linear response theory,… ) are helpful but not mandatory. No prior knowledge in one of the specific techniques (e.g. pump probe experiments, Floquet theory, fractionalization,…) needed.