The annual Studienwoche of the „Forschungsstudiengang Physik“ took place in Tramin an der Weinstraße, South Tyrol from the 12th to the 16th of September 2016. Under the topic of climate physics, three lecturers from all over Germany were invited to give classes covering several subjects.
As usual the topic of the Studienwoche was chosen as it is not taught in depth at the hosting universities of Erlangen and Regensburg. This year‘s topic was not only interesting from a physical and technical point of view but also because the impact on our daily is massive.
The introductory lecture given by Thomas Leisner from the Karlsruher Institut für Technologie (KIT) was „Strahlungshausalt und planetares Klima“. In this class the basic principles of how to calculate the temperature of the earth were discussed. The main idea is to argue that the earth is in thermal equilibrium and thus, balance equations could be set up. The second lecture given by Thomas Leisner was about clouds which are one of the most complicated things to model in simulations and, therefore, for predictions for the weather and the climate in the future.
The last topic he covered „Climate engineering“ is where he dealt with how mankind uses different methods to engineer the climate more or less directly. For example, there are ideas such as reducing the sun power arriving at the earth by placing shields at the Lagrange point between the earth and the sun to scatter the sun light and thus reduce its intensity reaching the earth. The Lagrange point is the point between the sun and the earth where the gravitational forces cancel.
Another idea is to place nanomaterials in the atmosphere to reflect the sun light. During this talk Thomas Leisner pointed out that these ideas are not yet feasable due to technical issues and due to the very high costs.
The second lecturer was Jürgen Karl from the Friedrich-Alexander-Universität Erlangen-Nürnberg. As an engineer he covered more different aspects of the climate than most physicists would do. His first talk was about „Zentral oder dezentral? – Technologien für die Energiewende“ talking about the different types of power plants. Starting with the conventional systems where the power is gained from nuclear reactions, oil or gas, he then explained the renewable systems.
Under the topic of „Was die Energiewende wirklich kostet“ he showed some calculations that considered the investments and the actual costs for electricity coming from renewable resources. He pointed out that the strongly debated „Erneuerbare-Energien-Gesetz“ (EEG) does not really make the electricity bill higher but in fact slowed down the cost increase.
He also showed that the argument that conventional techniques are necessary to ensure the power supply do not stand true but instead that the renewable energies already take this role. He concluded this talk by saying that the climate revolution is „on hold“ in Germany but also that it was successful and so should continue.
In his last lecture under the topic „Renewables go global“ he claimed that the climate revolution could be exported from Germany to countries all over the world. He also showed some alternatives which are used in other parts of the worlds like fracking and so on to gain more conventional resources like oil or gas. This procedure is mainly done in Northern America. He concluded, however, that this does not make sense from neither an economical nor from an ecological point of view.

The third lecturer invited to the Studienwoche was Georg Feulner from the Potsdamer Institut für Klimafolgenforschung. His first lecture took us on a journey through 4.5 billion years of climate history. The second talk was about the climate change itself and the speaker disproved some of the arguments from the opponents of climate change. He showed by clear arguments that these are sometimes really ridiculous.
In his last talk Georg Feulner described the methods by which to simulate the climate. He pointed out several times that these simulations always have their limitations and thus the results have to be taken with care as the considered system, i.e. our earth, is very complex.
As the topic is also very political, a discussion took place one evening. For most of the students it was already clear before the „Studienwoche“ that something has to change, both in society and in politics, with regards to the climate. It was still somewhat shocking for most of us that this has to be done so urgently and that the governments are often arguing the neccessity away.
To deepen the knowledge transferred in the lectures, the students were split into groups of five to work on some challenges on their own. In these challenges small model calculations had to be performed. For example, several groups calculated how much the global temperature would decrease if one would paint all roads in white so that the light absorption is reduced. As the calculations showed such effort would result in very little temperature decrease, the effect would be negligible.
Alongside these events we were able to enjoy the nice surroundings by doing a hiking tour for one afternoon. The tour was from Mendelstein to Lawinenspitz where we had an amazing view. After this refreshing tour in nature we had a joint dinner at the pizzeria „Schießstand“.
In total the annual „Studienwoche“ was again a great success and the participants now have a better understanding about climate physics and the climate change which will have a great impact on our daily lives in the future.

Programme of the Study Week 2016 with topic Climate Physics: 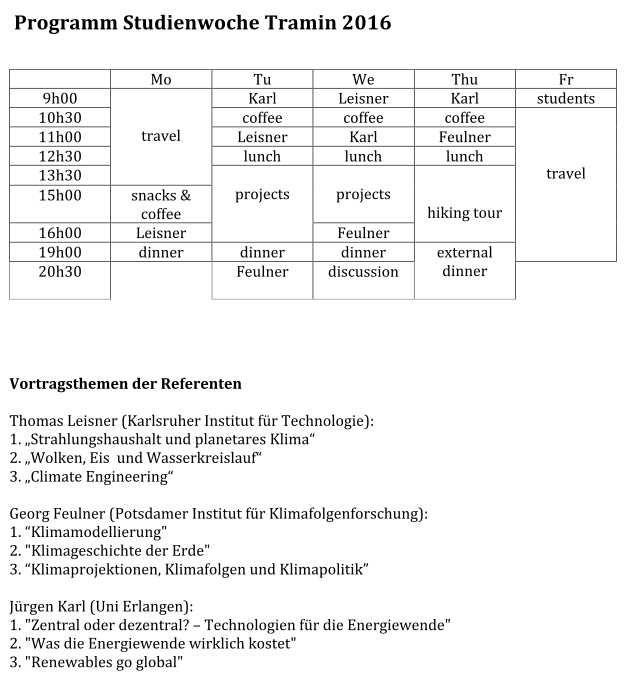