From the 21st to the 29th September the annual Studienwoche of the “Forschungsstudiengang Physik” took place in Tramin an der Weinstraße, South Tyrol. International lecturers from Cologne (Joachim Krug), London (Robert Endres) and Munich (Joachim Rädler) gave talks about the announced topic “Biophysics”.

One of the main goals of the Studienwoche is to give the students the possibility to learn about topics, which are not taught at the host universities of Regensburg and Erlangen. Thus the attending students only had a rough idea what to expect from the extremely broad field of “Biophysics”.
The introductory lecture given by Joachim Krug from the university of Cologne was about “Basic concepts of population genetic”, giving an overview about models of evolution. As he originally worked in the field of statistical physics, he emphasized the close relation between biophysical and statistical methods. During the week he held two more talks concerning “Fitness landscapes” and “ Clonal interference and the benefit of sex”.
Robert Endres from the Imperial College London gave talks about ”Information processing in bacterial chemotaxis”, “Emergence of collective behavior in social amoeba” and “Particle-shape dependence of engulfment in phagocytosis”. In these talks he described how to simulate the movement and navigation of bacteria. He also gave an introduction to theoretical cell models.
The experimental side of biophysics was addressed by Joachim Rädler from the Ludwig-Maximilians-University Munich. He gave an introduction to biophysical experiments and pointed out some fascinating results. His talks were given under the topics “Gene expression, gene regulation and the role of noise in genetic networks”, “Collective cell migration: from biology to soft matter physics” and “Enzymes: How molecular machinery works”.
It was very interesting for the students to see how physical concepts, also known from the standard physics classes, can be applied to other fields, especially with respect to future working opportunities. Beside the given lectures the students had the possibility to ask the lecturers about topics in biophysics and their personal decision to work in this field during the whole week.
To make the taught information more colorful, every lecturer brought some challenges, which had to be solved in small groups of about six students. These problems varied from doing evolutionary simulations, e.g. “Hawk and dove” or “rock-paper-scissors”, to task of calculating the computational limit of a cell. The results of these challenges were presented by the students at the end of the week.
Beside the informative parts of the Studienwoche, of course the beautiful landscape of the Alps was discovered. A hiking tour to the Kalterer See was organized at one afternoon. The tour took place along nice vineyards and apple farms. As Tramin is famous for its vine a traditional restaurant called a “Buschenschank” was visited. In this restaurant traditional food and delicious vine were served.
The annual Studienwoche was again a great success not only that the students now have an idea about biophysics but also the social cohesion within the Forschungsstudiengang was strengthened. 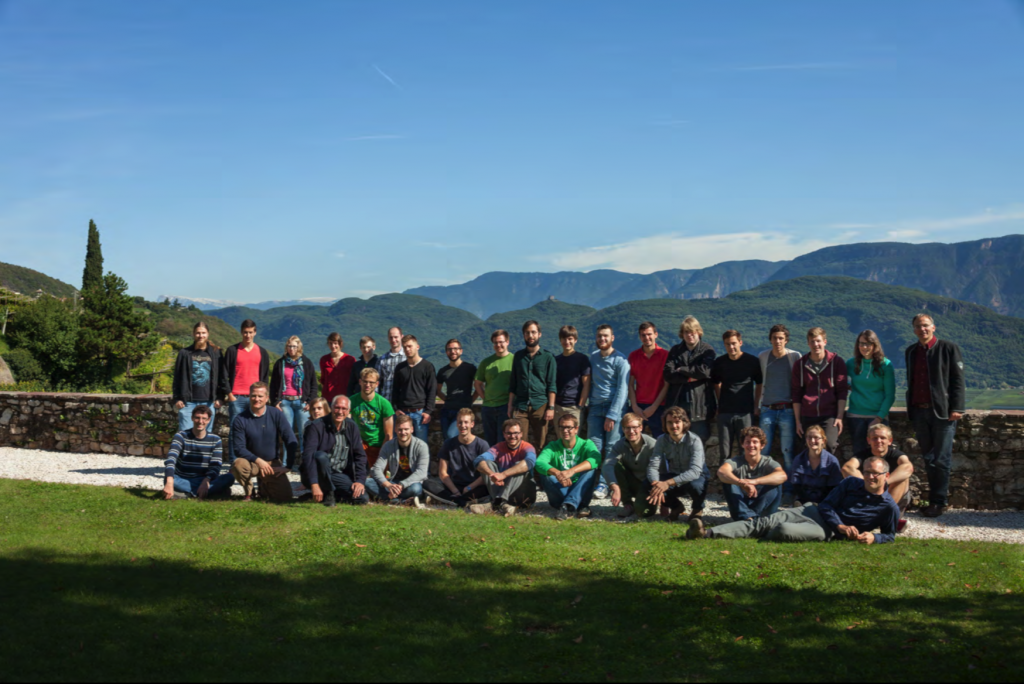 Programme of the Study Week 2015 with topic Biophysics: