Study Week 2019 on Physics and Music

In late summer 2019 the annual study week took place in Tramin, South Tyrol (Italy). This year the week was dedicated to “Physics and Music”. As usual the bus started early in the morning in Erlangen and Regensburg, however this year the students took more luggage with them compared to previous study weeks: Each student was invited to take music instruments with them in order to accompany the theoretical lectures and discussions with practical music making sessions. It turned out that many of the physicists in the programme play as hobby at least one instrument. Hence during the entire bus ride to Tramin there arose vivid discussions on who is playing which instrument and which ensembles could form in Tramin during the week.

With Theo Geisel from the MPI in Göttingen and David Wharam from the University of Tübingen we had two experts invited that gave us an introduction on Physics in/and Music – from both a technical and biological perspective. Theo Geisel started with a talk on Time Series Analysis of Musical Rhythms with many different examples included in the slides to listen to. His second talk gave an excursion into the world of Jazz: “It Don’t Mean a Thing if it Ain’t Got That Swing – Microtiming Deviations and Swing Feeling in Jazz”. David Wharam began his lectures with one on “The Physics of Sound Waves and Human Hearing” where he provided an overview over the biological and physical foundations of human hearing. He went on with two talks on “The Mathematical Structure of Music” and “The Physics of Musical Instruments”, where he outlined different possibilities to create tones and sounds originating in different physical procedures of several classes of musical instruments. Furthermore, he explained different tunings in music and which problems arise in instruments, where the tuning is fixed and the same for any key. His series of talks was concluded with one on “The Psychophysics of Music and Human Hearing”.

A novelty this year was that next to the group challenges also practical exercises in the form of choire lesseons and ensemble plays were planned. Unfortunately, the third speaker who had intended to give these classes, got ill on short notice. But luckily two experienced singers with formation in choir direction were among the students, such that they could fill the gap. In these practical sessions the participants were introduced to the basics of professional singing. For example, they were shown how to use different resonance spaces within the body to create strong tones and sounds when singing. In the end the choir was able to perform some polyphonic pieces of music. In addition, also the music instruments brought from home were used in various different groups, like an irish fiddle ensemble or a Jazz combo.

In the freetime, a trip with a beautiful hike in the mountains and also an external dinner in the Buschenschank, a typical South Tyrol restaurant in an old barn where one can sit inside hughe barrels, were part of the study week.
The making of music together in various forms and groups was a fantastic experience, and many students brought surprising, hidden talents to light. We got to know each other from a completely new perspective and had a fantastic time with the combination of Physics and Music.

Programme of the Study Week 2019 with topic Physics and Music: 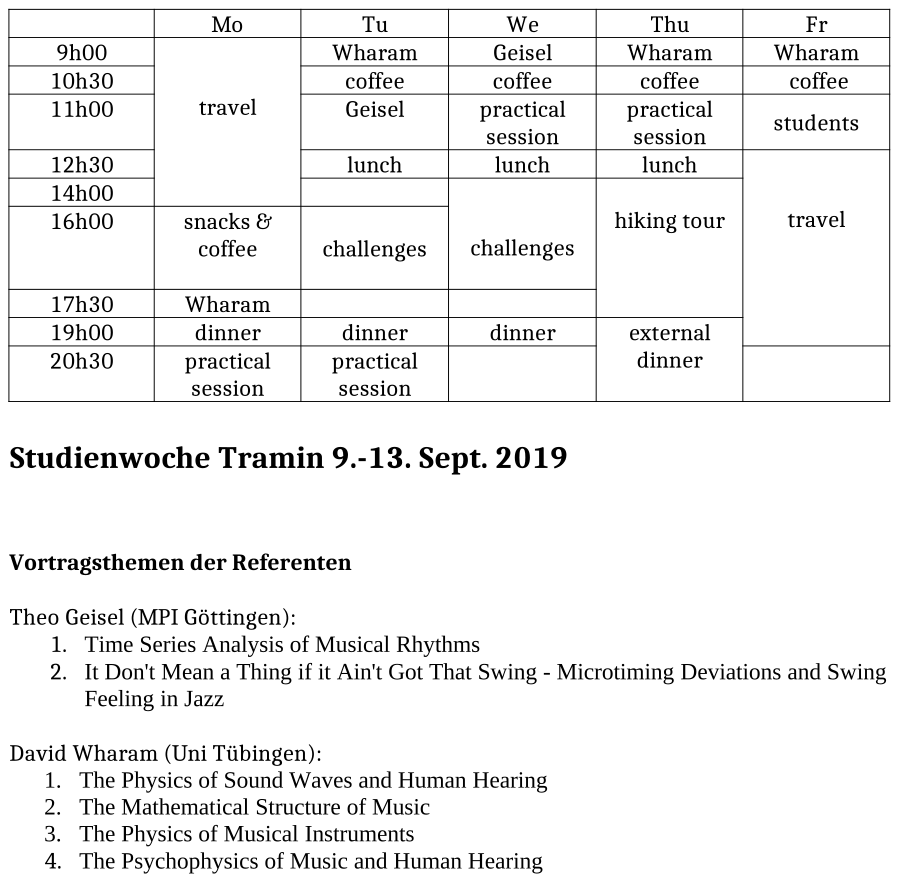