In the last week of September the students of the physics advanced programme met for the traditional study week. This year the event finally again took place in the beautiful region of South Tyrol in Tramin. After two years of Corona with no or only a local study week in Regensburg, it was like coming home to a well-known place … at least for the well-experienced ones with a large number of semesters. This natural course of studying also partly explains the topic of this years’ trip — Most of the participants were still in school as the topic of climate physics was last discussed at the studying week in 2016.

A huge topic from different perspectives

But moreover the chosen topic of climate and environment studies covers one of the most urgent, challenging and visible subjects of science and society nowadays. To get a broad overview of the large and versatile field in the short amount of time, three speakers introduced us to their research, reaching from climate modeling to smart distribution of renewable energies.

Marine Bonazzola from the Sarbonne University in Paris gave a detailed introduction into the topic of climate modeling, focussing in particular on the dynamics of the atmosphere. Starting from simple concepts such as absorption, reflexion, and emission, she presented models for describing the impact of clouds and their specific structure and height, different terrains, aerosols, seasons, volcanic eruptions and many more. Sounding complicated enough, we also learned how one tries to deal with the challenge of adding the effect of humankind to these models.

With Detlev Stolten from the institute of energy and climate research in Jülich we got a glimpse on the current development of mastering the economic challenges to fulfill the goals of German and European governments. By estimating the impact of certain measures on climate while optimizing the overall costs, Stolten presented plans of his group for the next years for reaching the goal of carbon net neutrality until 2050.

As a third perspective, Katja Frieler from the institute of climate research in Potsdam focussed on the current and future consequences of climate change on various ecosystems. She lucidly showed the drastic impact of large and frequent heat waves and increased overall temperatures: Irreversible loss of species on land and in water, as well as rising probability of drastic weather events, strongly affecting several fields of society including health as well as economy.

All around the lectures

To accompany the various theoretical lectures, we also worked on a wide range of small challenges, like setting up a business plan for the transformation from combustion-driven to hydrogen-driven buses, finding arguments against the most-common climate-change skeptical theories, or calculating the impact of a melting iceberg into the ocean with a higher salt concentration (completely negligible effect, we should have sticked to the actual question 😉 ).

In-between lectures and discussions, we enjoyed the beautiful accommodation with fantastic and diverse dishes and a cosy wine cellar for wrapping up the days with nice chatting and board games, accompanied by an enthusiastic group making music. To benefit from the surrounding vineyards, apple orchards, and hills all around, several different hiking tours were made on the last afternoon.

Sadly also in 2022 no event comes without Covid-19 struggling. For this time it unfortunately caused one of the speakers holding the lectures only digitally and an abrupt end to the last day. We wish the best for all people who got infected and hope they will get well again soon. Nonetheless, we had a fantastic week in Tramin with an interesting topic and good community and look forward to meeting again soon for the next events. 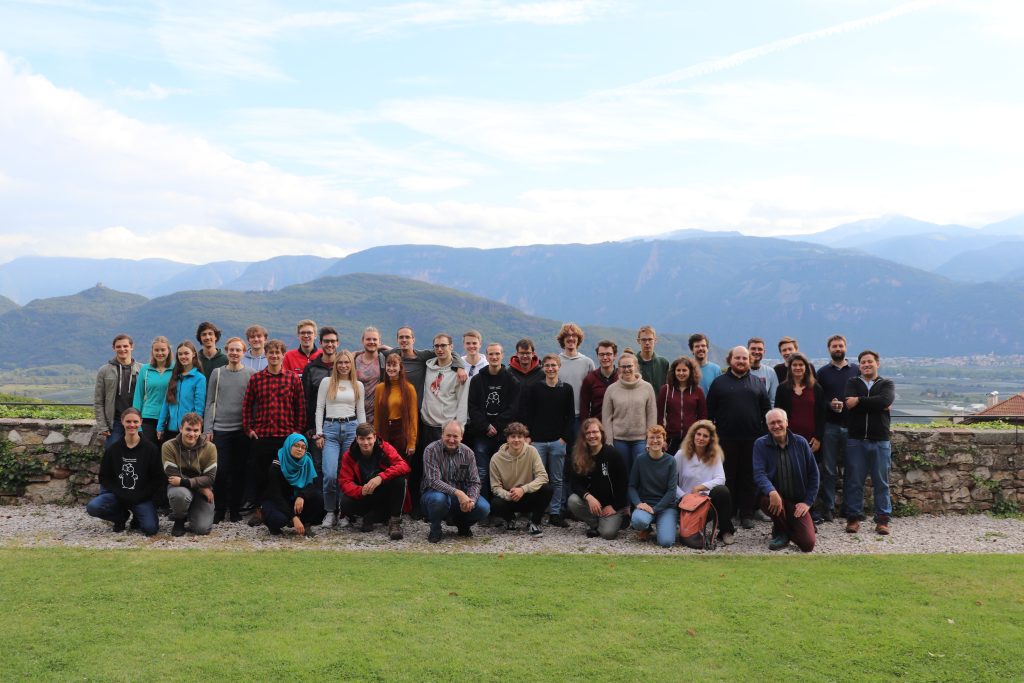